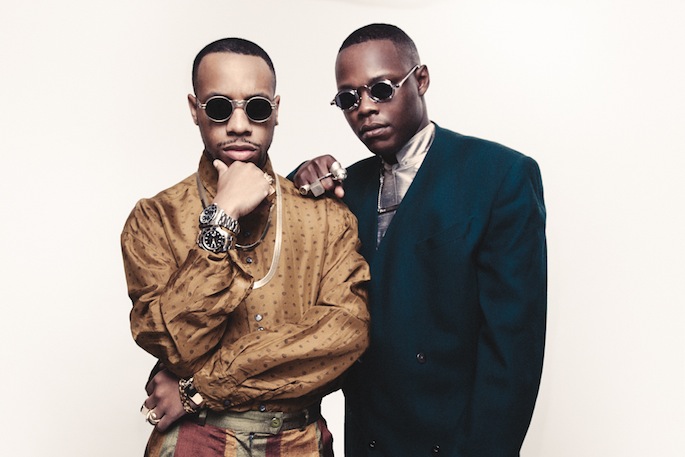 In tradition with our Essential Playlist Material: The Mixes collection we bring you an exceptional and exclusive hour long mix from Los Angeles based producers NEWBODY. The pair has been silently building their empire for a few years now amidst the ever growing electronic scene here in LA. Inclusively, the guys are also harvesting a label which will be dropping a slew of nauseating tunes this year. Their affinity for pop, house and garage music shines through in their quality productions and its the very quality that initially attracted us to them and should leave you begging for more. If the guys aren’t yet on your radar, grab a pair of headphones, kick back and hit play as you read our interview with them. You’ve got a lot to learn.

The mix is seductively WORTHY and severely inflammatory, but it should speak for itself.  So without further adieu, catch the interview and tracklisting after the jump and enjoy a few exclusive tracks from NEWBODY Records.

IHOS: How did you guys meet?

Jonathan: We actually met on MySpace many years ago! We always had a lot in common but didn’t start creating music together until a couple of years into the friendship.

Roberto: It feels funny to say that but we really did meet on MySpace. It wasn’t too long that I was begging my parents to buy me a ticket to LA to record some songs with someone I’ve never actually met in person, and that’s exactly what I did.​

IHOS: I know Newbody is a collaboration between two creative sectors: the DJing/production and the vocal/song writing. What is your guys’ formula for making music?

J: ​I usually make an eight or sixteen bar loop and if Roberto likes it, he start writing and the track develops from there. But it honestly doesn’t fully come together until the recording process as that allows to really figure out what works and what doesn’t.

R: If it’s a track that I instantly connect with I’ll start coming up with melodies and then lyrics and then we try to lay something down. Usually the song goes through many phases until we are 100% happy with it. Sometimes we’ll completely scrap a few days work and write something new. It’s really about the end result.

IHOS: You recently launched your new record label company (which we here at IHOS have all been gushing about). What has been the challenges and successes of starting a label?

​J: ​Thank you! Starting the label has been really exciting because I get to wear many different hats..from remixes to writing press releases to conceptualizing the overall aesthetic of the label. The best part though is really that I’ve found so many talented artists who are willing to trust and ride with me so early on! Everyone involved is so incredible. The last two months have been a bit slow going into the new ​year ​but we’ll be back on track soon with some siiickening releases!

IHOS: What are some exciting things to come from your label?

​J: ​A highlight for me was the last release from Baxley which featured a remix from Chicago legend, Stacy Kidd..but in the near future we’ve got a jazzy house joint for a talented producer under the top secret alias of Street Clothes, some extra jackin garage-house from Alex Agore, some smooth, grown and sexy house narratives from Trinidad Senolia, a new NEWBODY E.P…plus we got remixes on the label from Brillstein, Stevie B. from Pipes, Seven Davis Jr., An Expresso and more where that came from..

IHOS: I know you’ve performed a few times at the notorious A Club Called Rhonda. What were those experiences like?

J: Honestly, Rhonda is consistently of the best crowds we have the pleasure of playing for. Just really great energy, the crowd is really there with you. They’re there for the music and it’s really special. Some people don’t know this but I go way back with the promoters Loren, Greg and Ryan. I met them all the way back 2005 and they’ve ALWAYS known how to put on a great party. It’s in their blood.​

R: Rhonda is one of the best places to play because people come there ready to dance and get crazy. Greg and Loren put so much effort into each party from the lineup to the decor. It’s also fun to be on the same bill as legendary producers and DJ’s. I remember once being in the booth with Basement Jaxx and thinking “This is insane!” You never know who you’ll see there. ​

IHOS: Having traveled to other parts and regions, what have you noticed about LA in comparison to other cities? Is the LA night life and community truly an animal of it’s own?

J: ​Maybe I’m biased but LA really does have one of the best scenes when it comes to dance music. We got disco, modern funk and house music on lock. NY does its thing too when it comes to those genres but it seems like it’s more saturated into the lifestyle here than other places I’ve been. The dance community here is really on the rise and it’s one of the best times to be here right now.

IHOS: We have noticed your new EP presents a refined, polished, and cosmic sound. How have you noticed your sound evolving?

​J: ​Oh yes! Very much so…we’ve always kind of been that way as artists. The true tea on ‘Emotional’ is that it was actually a very early track from before we even had a name for the project. We’re happy that you like it and that it still holds up!

R: I think one of our main goals is to always continue to push ourselves and our sound. ​

IHOS: What inspires your general aesthetic and style? Where do you draw that inspiration from?